The CADP toolbox contains several closely interconnected components (more than 42 tools and 17 software components), which we classify into the following categories:

There exist other tools interconnected with the CADP toolbox. See the list of research tools developed using CADP for details.

CAESAR is a compiler that translates the behavioural part of a LOTOS specification into either a C program (to be executed or simulated) or into an LTS (to be verified using bisimulation tools and/or temporal logic evaluators).

For instance, one can check the LTS of a protocol against the LTS of the service implemented by the protocol. Both LTSs are generated using CAESAR and compared using BISIMULATOR. It is also possible to specify protocol properties using temporal logic formulas that can be evaluated on the protocol LTS.

CAESAR translation algorithms proceed in several steps. First the LOTOS description is translated into a simplified process algebra called SUBLOTOS. Then an intermediate Petri Net model is generated, which provides a compact, structured and user-readable representation of both the control and data flow. Eventually the LTS is produced by performing reachability analysis on the Petri net.

CAESAR accepts full LOTOS with the following restriction as regards the control part: process recursion is not allowed on the left and right hand part of |[...]|, nor on the left hand part of >> and [>. Despite these restrictions, the subset of LOTOS handled by CAESAR is large and usually sufficient for real-life needs.

The current version of CAESAR allows the generation of large LTSs (some million states) within a reasonable lapse of time. Moreover, the efficient compiling algorithms of CAESAR can also be exploited in the framework of the OPEN/CAESAR environment (see below).

The most recent version of CAESAR provides a functionality called EXEC/CAESAR for C code generation. This C code interfaces with the real world, and can be embedded in applications. This allows rapid prototyping directly from the LOTOS specification.

CAESAR.ADT is a compiler that translates the data part of LOTOS specifications into libraries of C types and functions.

CAESAR.ADT accepts fulls LOTOS with the following restriction, as regards the data part: so-called "constructor discipline" has to be enforced: constructor operations must be identified; equations are oriented; there is a decreasing priority between equations; equations between constructors are not allowed. Also, parametrized types are not compiled (yet).

CAESAR.ADT is fast: translation of large programs (several hundreds of lines) is usually achieved in a few seconds. CAESAR.ADT can be used in conjunction with CAESAR, but it can also be used separately to compile and execute efficiently large abstract data types descriptions.

CAESAR.INDENT is a LOTOS program formatter. It checks first the syntax of the LOTOS description and then indents it in a way that makes reading it easy.

BCG (Binary-Coded Graphs) is both a format for the representation of explicit LTSs and a collection of libraries and programs dealing with this format. Compared to ASCII-based formats for LTSs, the BCG format uses a binary representation with compression techniques resulting in much smaller (up to 20 times) files. BCG is independent from any source language but keeps track of the objects (types, functions, variables) defined in the source programs. The following tools are currently available for this format:

OPEN/CAESAR is an extensible, language-independent environment that allows user-defined programs for simulation, execution, verification (partial, on-the-fly, etc.), and test generation to be developed in a simple and modular way. Various modules have already been written in the OPEN/CAESAR framework, including:

Six languages have access to the OPEN/CAESAR environment, via the following tools:

Since OPEN/CAESAR is open and well-documented, users can easily extend the environment by adding their own modules to fit specific needs. 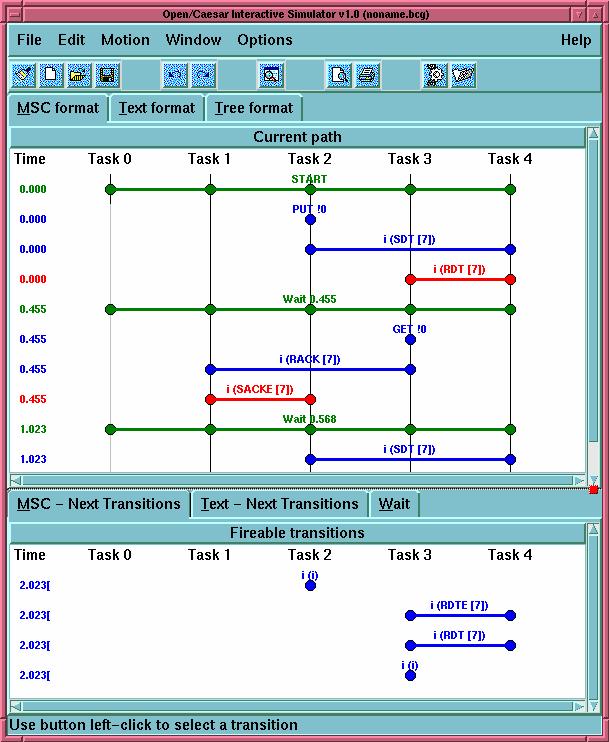 BISIMULATOR is an equivalence checker, which takes as input two graphs to be compared (one represented implicitly using the OPEN/CAESAR environment, the other represented explicitly as a BCG file) and determines whether they are equivalent (modulo a given equivalence relation) or whether one of them is included in the other (modulo a given preorder relation). BISIMULATOR works on the fly, meaning that only those parts of the implicit graph pertinent to verification are explored. Due to the use of OPEN/CAESAR, BISIMULATOR can be applied directly to descriptions written in high level languages (for instance, LOTOS). This is a significant improvement compared to older tools (such as ALDEBARAN and FC2IMPLICIT) which only accepted lower level models (networks of communicating automata).

BISIMULATOR works by reformulating the graph comparison problem in terms of a boolean equation system, which is solved on the fly using the CAESAR_SOLVE library. A useful functionality of BISIMULATOR is the generation of a ``negative'' diagnostic (i.e., a counterexample), which explains why two graphs are not equivalent (or not included one in the other). The diagnostics generated by BISIMULATOR are directed acyclic graphs and are usually much smaller than those generated by other tools (such as ALDEBARAN), which can only generate counterexamples restricted to sets of traces.

The 1st, 4th, and 8th reductions above are obtained by encoding the reduction problem into a boolean equation system that is resolved on the fly using the CAESAR_SOLVE library. The 8th reduction is ``orthogonal'' with the first five reductions in the sense that it can be combined with any of them.

EVALUATOR is an on-the-fly model-checker for regular alternation-free mu-calculus formulas on Labelled Transition Systems. The input language of EVALUATOR is an extension of the alternation-free mu-calculus with boolean formulas over actions and regular expressions over action sequences, allowing a simple, compact specification of safety, liveness, and fairness properties. The input language is extensible, due to a macro-expansion and a file inclusion mechanism, which allows to define reusable libraries of new temporal operators. The model-checking algorithms of EVALUATOR are based on the efficient local resolution of boolean equation systems. EVALUATOR is equipped with diagnostic generation algorithms, which construct both examples and counterexamples (i.e., portions of LTS explaining why a formula is true or false).

XTL (eXecutable Temporal Language) is a functional-like programming language designed to allow an easy, compact implementation of various temporal logic operators. These operators are evaluated over an LTS encoded in the BCG format. Besides the usual predefined types (booleans, integers, etc.), the XTL language defines special types, such as sets of states, transitions, and labels of the LTS. It offers primitives to access the informations contained in states and labels, to obtain the initial state, and to compute the successors and predecessors of states and transitions. The temporal operators can be easily implemented using these functions together with recursive user-defined functions working with sets of states and/or transitions of the LTS. A prototype compiler for XTL has been developed, and several temporal logics like HML, CTL, ACTL and LTAC have been easily implemented in XTL.

BCG_DRAW provides a 2-dimension graphical representation of BCG graphs with an automatic layout of states and transitions.

BCG_EDIT is an interactive editor which allows to modify manually the display generated by BCG_DRAW. 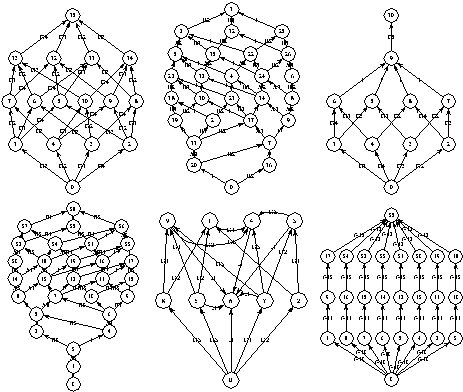 EXP.OPEN is a tool that explores on the fly the graph corresponding to a network of communicating automata (represented as a set of BCG files). These automata are composed together in parallel using either algebraic operators (as in CCS, CSP, LOTOS, and muCRL), ``graphical'' operators (as in E-LOTOS and LNT), or synchronization vectors (as in the MEC and FC2 tools). Additional operators are available to hide and/or rename labels (using regular expressions) and to cut certain transitions.

SVL has been used in several case-studies: most of the CADP demo examples take advantage of SVL readability and conciseness.

To push forward the limits of enumerative verification algorithms, CADP includes tools to parallelize the graph construction algorithm, which can be used on clusters of PCs and networks of workstations.

DISTRIBUTOR splits the construction of a graph over N machines communicating using Tcp/Ip sockets. Each machine builds a graph fragment, the distribution of states between the machines being determined by a static hash function.

SEQ.OPEN is a tool which allows to verify execution traces generated by a system functioning as a black-box automatically. SEQ.OPEN allows to use the verification tools developed in the OPEN/CAESAR environment to work on traces encoded in the SEQ format. SEQ.OPEN does not load the execution traces in memory, which allows to verify very long traces, and uses a software cache to optimize access to frequently visited transitions and labels.

TGV is a tool for the generation of conformance test suites based on verification technology (jointly developed by the PAMPA team of INRIA Rennes and the Verimag laboratory and integrated into the CADP toolbox with the help of the VASY team). TGV takes as entries a description of a protocol's behaviour and a test purpose, which selects the subset of the protocol's behaviour to be tested. It produces test suites, which are used to assess the conformance of a protocol implementation with respect to the formal specification of the protocol.

BCG_MIN allows to minimize BCG graphs modulo strong or branching bisimulation, which agree with the concept of lumpability on Markov models.

CUNCTATOR takes as input a Continuous Time Markov Chain expressed as an implicit OPEN/CAESAR graph, performs an on-the-fly steady-state simulation whose termination is specified by a maximal virtual time elapsed or by a maximal number of transitions explored, and outputs the equilibrium throughputs for a given set of actions.

DETERMINATOR takes as input a Markov model expressed as an implicit OPEN/CAESAR graph, checks that it satisfies certain conditions and, if so, generates a reduced Continuous Time Markov Chain in the BCG format by removing stochastic nondeterminism on-the-fly.

BCG_STEADY performs steady-state analysis on a Continuous Time Markov Chain encoded in the BCG format. It computes the equilibrium (steady-state) probability distribution on the long run using the Gauss/Seidel algorithm and can also compute throughputs for the transitions of the system.

BCG_TRANSIENT performs transient analysis on a Continuous Time Markov Chain encoded in the BCG format. It computes the time-dependent (transient) probability distribution of the model at several (user-specified) time instants using the uniformization algorithm and the Fox-Glynn method to approximate Poisson probabilities and can also compute throughputs for the transitions of the system.

EUCALYPTUS is a graphical user interface written in Tcl/Tk that integrates CADP and several other tools developed (APERO (Liege, Belgium), ELUDO (Ottawa, Canada), FC2TOOLS (Sophia-Antipolis, France), VISCOPE (Rennes, France)) in a unified, user-friendly interface. This interface has the name of the project within which it was developed: the euro-canadian project " EUCALYPTUS" 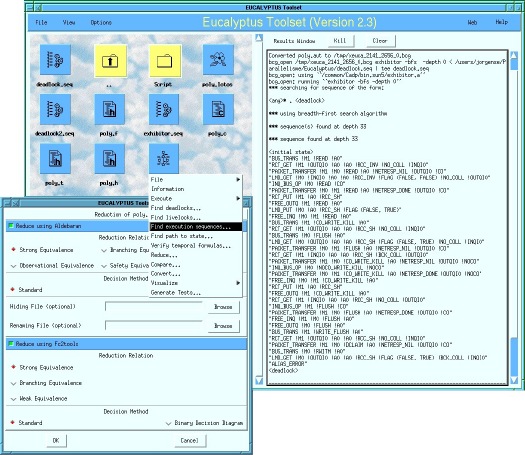 TST is a tool which checks the way CADP is installed and configured on the current machine in order to detect potential problems. Many verifications are performed, most of which derived from common problems reported by CADP users.

Back to the CADP Home Page